10 things your fancy camera won’t do.

Tue
1 Jul 2014
As a photographer, I’m used to being told that my days are numbered. The latest cameras have more and more automatic features and pretty soon you wont need to know anything about photography at all to take a great photograph, it will be something everyone can do. 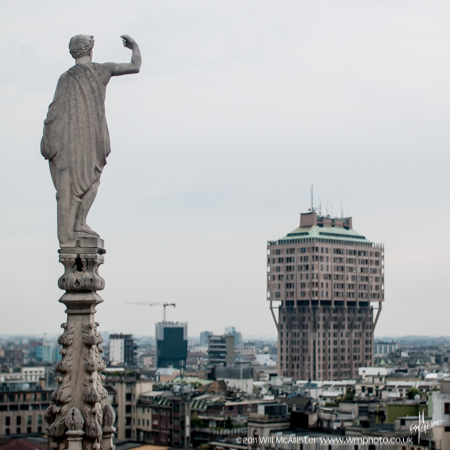 When composing an image creatively, only you know whether you want the statue or the building in focus
If a camera comes along that can do any of these ten things then either we’ve invented artificial intelligence capable of creative thought, or we’ve invented mind reading technology capable of translating your thoughts about what you want to create into actions. Either way I think photographers won’t be the only people out of work and cameras are unlikely to be the first place we see such technology.

As for me, I’m not overly concerned

Tell you what depth of field you need

Depth of field is one of the key qualities of an image which comes as a trade-off with the amount of light hitting the sensor. What you want is a highly creative decision varying from very shallow focus where only one small part of your subject is sharp to very deep focus keeping both foreground and background sharp; and involves some reading of the scene as the camera doesn’t know how large your subject is and therefore how much depth of field is required to get the whole subject in focus.

Know where you want to focus

Autofocus has taken some of the legwork out of getting the focussed part of an image sharp, but it is still down to you to pick where on the frame you want the autofocus to operate. Simple in principle but it takes practice to be able to pick and focus flawlessly especially on a moving subject. Say you want to photograph a cyclist passing in front of a building; the camera doesn’t know it’s the cyclist you want in focus rather than the building (assuming it is).

Know how fast your subject is moving

A moving subject can be challenging to focus on. Either you can focus on the space they’re move into and take the photo when they enter it, or you can use continuous focus mode and try and keep the autofocus point over them as they move. Both of these techniques require you to know how they’re moving, which goes back to the point of knowing what the subject is in the first place.

Know whether you want to freeze or blur motion

Remaining on the topic of moving subjects, there is another factor. Motion, like depth of field is a key quality, and like depth of field is affected by a setting which also affects the amount of light hitting the sensor. Since as with depth of field, motion is affecting by a setting which also affects the exposure there is also a level of trading off to be had, changing one setting will force you to rethink the other, and like depth of field, only you know the difference between good motion blur such as that used to convey speed in the photo of the cyclist, and bad motion blur such as the bride’s face being blurred by her motion up the aisle.

Tell you where to position lights

This is one of those things where there’s no right or wrong way to light a scene, but if you have a clear idea in your head if how you want it to look, you need to apply a certain amount of knowledge about how light bounces around to get an image that matches your imagination.

Tell you how best to process the image

Even the best photographers don’t rely purely on the image coming out of the camera ready for public consumption. Taking the raw information and either fine-tuning it to give it extra impact or applying techniques to create something completely new from it is a necessary part of the process of producing the kind of amazing images you see from the best of the best, and there are no advantages to be gained by eschewing the digital darkroom altogether. As with lighting there is no right or wrong answer, just the inspiration to see what you want and the technical skills to apply processing in the way that achieves this.

Tell you how best to display the image

An often overlooked skill in photography is presenting photographs. Most people will be perfectly satisfied with the pre-designed presentations of sites like Facebook and Flickr, but if you want to really get the most from your images you have to know how to use them, not just how to take them. It’s a creative choice and a difficult one to learn but doing it right can lift an image from very good to amazing.

Tell you where to position the camera

I thought I’d wait until point 8 for the ‘duh’ moment but no amount of automation can make a dull composition into something more alive. As you move your camera around your subject and closer or further away you change the background, the depth of field, the perspective and also influence certain human perceptions such as looking up on something versus looking down on it.

Tell you if there is something intruding in the image

We’ve all been there; thought we had the perfect composition only to get home and view it on the screen to realise that just to the subject’s right shoulder is an overflowing bin full of mouldy chip wrappers and burger boxes. The perception to see things which your brain has been conditioned to edit out internally comes with practice and no, your camera can’t tell you something is there, as far as your camera is concerned this could be a person intruding into a photograph of a bin as much as a bin intruding into a photograph of a person.

Tell you anything about the image’s visual impact

I thought I’d finish up on the most creative, most obvious and difficult to quantify thing of all, impact (I don’t know if you’d noticed I’d started with more technical aspects and moved up though levels of creativity). An image with strong impact compels you to look at it some more, and provokes a strong reaction from you, whether that be eliciting an emotion in you, or setting you off on a train of thought. In this respect photography is like any other art, and its adherents more than just technicians. Creating is a fundamentally human activity and the value of a creation is nothing without the human that created it.

This post was originally posted on my WordPress blog but since I'm going to start blogging over here I needed to put something on the site to test the layout, so I'll be copying one or two old posts to the new blog.